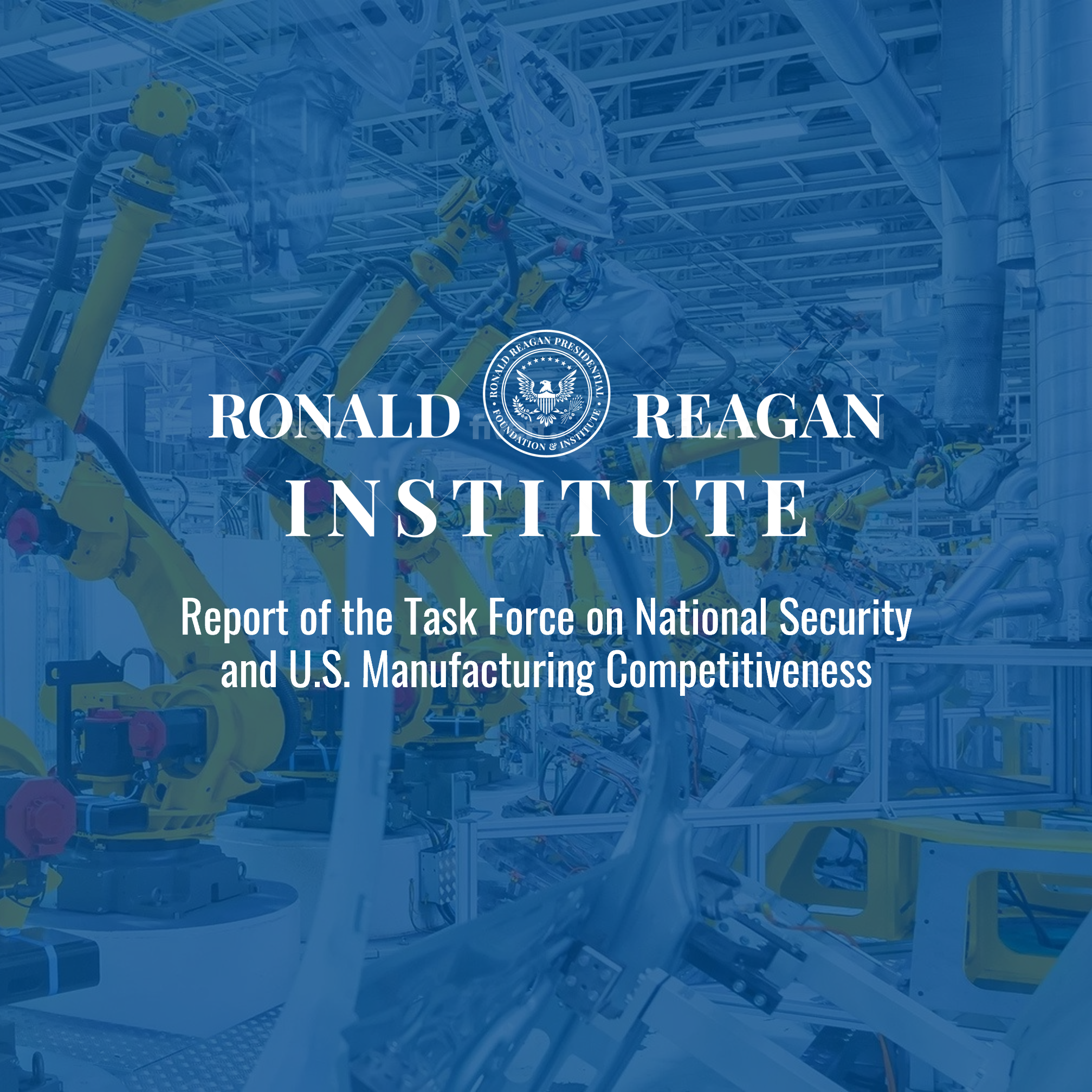 The Reagan Institute’s Center for Peace Through Strength today released the findings and recommendations of its bipartisan Task Force on National Security and U.S. Manufacturing Competitiveness. John May, Founder and Managing Partner of CORE Industrial Partners, a Chicago-based private equity firm, served on the Task Force, which included leaders and experts in national security, manufacturing, capital, supply chains, and public policy.

“It was an honor to serve as part of this vital Task Force, providing a frontline and forward-thinking perspective regarding the private sector’s role in shaping the future of manufacturing here in the Midwest, nationwide, and around the globe,” said May, who founded CORE in 2018. “Industry 4.0, also known as the fourth industrial revolution, is being powered by a new generation of rapidly growing manufacturers, fusing technology with advanced process and engineering design. The success of Industry 4.0 is at the center of the Task Force’s recommendations and now is the time to put these ideas into action.”

The Task Force was co-chaired by Marillyn Hewson, former Chairman, President, and CEO of Lockheed Martin, and David McCormick, the CEO of Bridgewater Associates and a former Undersecretary of the Treasury for International Affairs.

“The economic and national security threat from China cannot be ignored,” said Hewson. “There is bipartisan support to take action, and this report identifies steps that we can take to strengthen and leverage investments in infrastructure, facilities, technology, and most importantly, people.”

“The COVID-19 pandemic showed us that we can no longer afford to neglect the resiliency of our supply chains and defer capital investment in national security-critical sectors. The pandemic also demonstrated the creative potential inherent in America’s economy,” said McCormick. “By investing in that potential, we can rebuild a world-class manufacturing sector that helps to keep our country safe.”

1. Scale up workforce development programs to credential more workers for high-demand trades: We should expand employers’ roles in workforce training by repurposing existing federal education grants to allow high school graduates to earn credentialed skills. U.S. manufacturers should commit to fund 500,000 new graduates of trade school and apprenticeship programs over the next decade.
2. Stand up a public-private capability to finance investments in domestic manufacturing sectors critical to national security: The federal government must develop the capability to work with private sector employers, as well as state and local governments, to provide liquidity and low-cost capital to critical domestic manufacturers and infrastructure.
3. Modernize the Defense Production Act for the 21st Century: Update the DPA to enable holistic solutions for critical manufacturing facilities, such as targeted visa approvals for STEM talent, direct project financing, automatic fast-tracking of permits, and investments in workforce training.
4. Establish a new forum of G7 + Quad countries to coordinate on geo-economic issues: The United States should establish a new forum to promote enhanced coordination on topics like growth, data governance, technology standards, and supply chain security.

ABOUT THE REGAN FOUNDATION AND INSTITUTE:
The Ronald Reagan Presidential Foundation and Institute is the nonprofit organization created by President Reagan himself and specifically charged by him with continuing his legacy and sharing his principles -individual liberty, economic opportunity, global democracy and national pride. The Foundation is a non-partisan organization which sustains the Ronald Reagan Presidential Library and Museum in Simi Valley, CA, the Reagan Center for Public Affairs, the Presidential Learning Center, The Air Force One Pavilion and the award-winning Discovery Center, as well as the Reagan Institute, which carries out the Foundation’s work in Washington, D.C. The Reagan Library houses over 55 million pages of Gubernatorial, Presidential and personal papers and over 60,000 gifts and artifacts chronicling the lives of Ronald and Nancy Reagan. It also serves as the final resting place of America’s 40th President and his First Lady.